Peace: the light within the darkness

Home / Blog Posts / Ministry of Presence / Peace: the light within the darkness

Reflection on the Word – Advent 2

1 Beginning of the good news of Jesus messiah, son of God:

2 Just as it stands written in Isaiah the prophet:

Look! I am sending my messenger before your face,

who will prepare your road.

3 A voice is bellowing in the wilderness:

Prepare the road of the Lord,

appeared in the wilderness,

proclaiming a baptism of repentance

aiming at forgiveness of sins.

5 All the region of Judea was going out to him,

and every person in Jerusalem.

They were being baptised by him in the Jordan river,

baptised while they confessed their sins.

6 John was clothed in camel hair.

He had a leather belt around his waist.

He ate locusts and wild honey.

the one who is stronger than I,

he is coming after me.

I am not worthy to stoop down to untie the thong of his sandals.

8 I baptised you with water.

He, however, will baptise you in holy spirit.

In the earliest days, years, decades, after Jesus walked the earth, those touched, healed, transformed by him told his stories, told their stories of encounter with Jesus. They sought to give voice to experience, to the way he made them feel hopeful again, joyful even, loved, deeply; the peace he left in their beings, between them in community. How to describe the way he brought God’s very self into their midst? How to share the Spirit so close it was his very breath? How to say – he was Wisdom, he was the Word of God? How to convey the connection he had with Maker / Creator / Parent? How indeed, do we struggle with the words to tell others of the impact of the story of, and our encounter with the Divine, Wisdom Creator Spirit, Jesus messiah?

So often, we go back to the stories of our spiritual ancestors, the stories that followers of Jesus have told generation after generation, to find a way to speak the undescribable.

The early tellers of Jesus’ story went back to the stories of their ancestors, the Jewish, Israelite, Hebrew prophets, to find the articulation of hope they knew Jesus to be – as we considered last week.

Last week, it was hope the prophets spoke for the people. This week, the words of the prophets being cited point to promises of peace, comfort, restoration and rest.

The peace of Holy One, as we discovered last week with the words of Holy One, is not the peace the world offers.

Take for example, the ‘pax romona’, the peace of Rome, propaganda style justification of the Empire for their subjugation of other nations, as if to say, ‘We’re offering you peace, we’re good for you.’

But the peace the Empire offered was essentially the maintenance of Roman social order’s status quo. Revolution, resistance, opposition to that order was not – decidedly not – tolerated. The power that resided with the elite was protected so as to remain with the elite, the majority of the population oppressed within the strict and restricting hierarchy that deemed a complete human to be the elite man, and everyone else a step further away from being considered fully human.

That is not the peace offered in the realm of God.

Early followers of Jesus, telling the stories that come to be recorded in the gospel accounts, folded Jesus into the tradition of the prophets in order to understand and describe his meaning to them.

When the gospel writers, when Jesus, cites one line of a Psalm, their purpose is to recall for listeners the whole Psalm, trusting to the practice of the people who sang and knew in their hearts the Psalms.

I wonder if the same is the case here, Mark citing part of a section of the prophet Isaiah in order to recall for the listeners the whole of that oracle?

So that we are meant to remember the breadth of what we hear from Isaiah today – not only prepare the road, make straight the paths, but comfort, comfort, my people; and every mountain will be made low, every valley lifted up – your way will be clearer now. Your time of trial is coming to an end, and the time for restoration and rest is here. Be at peace.

The care of a shepherd or a mother will enfold you.

Coming back to Mark citing Isaiah, here’s some thoughts from Richard Sawnson whose translation we heard:

‘this is the beginning of the good news. It is also the beginning of the making and keeping of promises. The storyteller announces the beginning of the story, but before the story can begin, Isaiah must be summoned to deliver promises. Exodus and Malachi are also drawn in, but the story calls only Isaiah’s name, only the prophet from the time of the return from exile, the return to the land to rebuild the Temple that had been destroyed. Remember that Mark’s story is being told after the Second Temple had been destroyed when the Romans crushed the first Jewish Revolt. The ancient audience knew this, and it will have lent a certain poignancy to this scene.

Isaiah enters, carrying the old composite promise of someone who will prepare the people for restoration. John appears; he draws the whole region to him, and every person in Jerusalem swirls around him. The storyteller is creating a world that swirls and races in response to the promise of restoration and rest.’

‘For the Jewish community to have remained sufficiently coherent and self-aware to be able to stand up and go home to rebuild the Temple after seventy uncertain years in Exile is an astonishing accomplishment. … The strategies that preserved the Jewish people shape the creation stories told in Genesis 1 and 2. Both stories show an awareness of Babylonian origin stories, chiefly the story of the violent conflict between Marduk and Tiamat. Both Genesis stories refuse the violence that creates the world out of the slaughter of a female deity [the Babylonian story]. The Jewish community in Exile knows Babylonian violence up close, and they tell a story that refuses to create the world out of domestic abuse. God does not slaughter the world into being; God speaks to it as a mother speaks to her unborn child.’

I mentioned Rosa Parks and Martin Luther King Jr last week. For Martin Luther King in particular, there was a strong encouragement to the people to practice peaceful non-violent resistance. This resistance, while intentionally being not violent, was also not weak, not passive; it was actively and intentionally disruptive, disturbing the status quo that systemically oppressed a whole people.

To so shape your creation stories in direct opposition to the creation stories of your oppressor is another act of peaceful non-violent resistance. It is a strong, defiant, claiming of your own identity as decidedly not like those who have hurt you. Jewish creation history is non-violent because they have known violence and in this instance (because we know the story of ancient Israel does at other times include violence on their part), reject it. It is like a mother speaking life into being because they needed to hear the Divine voice whisper the strong message of peace that would enable them to resist, to find their strength and courage and resilience, and endure, and live to be able to fulfill the promise of peace.

A story for Doctor Who fans. and others.

When the Doctor was played by David Tenant, he was overpowered by his nemesis The Master, imprisoned, disempowered, severed from his people. So the Master thought. The Doctor’s companion, Martha, while The Master was busy subduing The Doctor and the whole earth under his crazed and cruel regime, travelled the earth secretly and whispered a story wherever she went. She told in hidden gatherings of oppressed but resilient people, the story of The Doctor, who on many occasions has come to Earth and rescued it and its inhabitants from the threat of invaders intent on destroying, on eliminating, humanity. She told the story again and again over the months of The Master’s plan unfolding, and like wildfire, the whisper snuck past The Master’s henchmen and the story took hold in the hearts of people the world over. So that at the right moment, when the plan was meant to come to full realisation, the people all thought at once one thought – The Doctor. And in the mystery and magic of science fiction, the power of this thought was the resistence, non violent resistence, restoring The Doctor his capacity to bring about peace on Earth again. 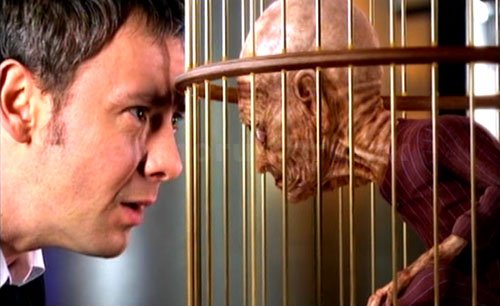 The Master has The Doctor safely out of the way.

Image from Doctor Who BBC page. The Master somehow always manages to return, though, and audiences of The Doctor know that this peace will last only until some future episode, when The Master crosses The Doctor’s path again.

The promises in the Biblical story are always not entirely fulfilled, either. The realm of Holy One is a paradox of now and not yet; it is the juxtaposition of promised peace with present challenge, of light within the darkness.

The peace that Holy One gives is strong, strong enough to help us endure. But it is also challenge, because we are part of the fulfilment of the promise. We hold the thought, the story, in our hearts; we pass the whisper of promise on, in readiness for the moment of truth.

When we open to the peace of Holy One, we are comforted, restored, offered rest; and we are transformed and disturbed, returned to a path of suffering and sacrifice – there is great risk in passing that whisper on – but the promise demands that we bear witness to peace, in order to be agents of peace.

Because peace, the peace of Holy One, is not pretty, perfect, or nice.

Comfort is rarely comfortable, is it? Because you’re still grieving, you’re still sheltering at home, and socially distanced. Comfort is more solidarity and presence, knowing you’re not alone. comfort is the promise of restoration and rest. comfort is strength to endure. that sort of comfort, that sort of peace, meets us in the reality of life, with its tensions and juxtapositions and paradoxes. Comfort, peace, wellbeing, is strength and purpose, non violent resistance and response.

Peace, wellbeing, fulness of our humanity – that’s what enabled Martin Luther King, Rosa Parks, to act out their hope for better days for their people; it’s what inspired Martha to travel the world with her whispered promise.

Peace, the peace Jesus gives us, is confidence in the presence of Holy One, trust in the light that shines in the dark. If hope is the sparking of that light, the disruption of the dark, peace is trusting it to remain, and helping it to grow stronger, drawing it closer to fill more of the darkness, and then we will come to know joy …